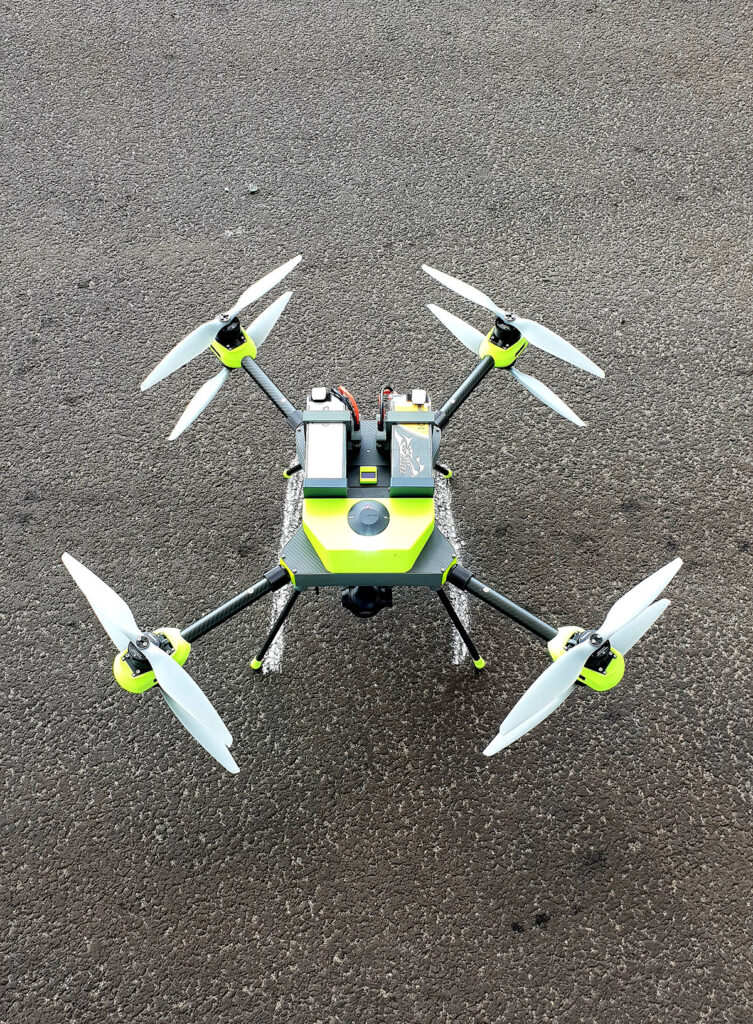 Polish and foreign press writes about us

The towed drone has found application in water rescue. Flying equipment has already appeared on Polish beaches. One of them is located, among others in Jastrzębia Góra. The drone can carry a person weighing up to 120 kilograms. – From next year, we introduce an automated search for missing persons using a thermal imaging camera. The drone starts the search grid itself, and if it verifies the heat-pixel point at sea, it stops and an alert appears on the monitor – said Sebastian Nowicki.

mamstartup.pl - Pelixar with the title "Young Company of the Year"

The company Pelixar from the Pomeranian Science and Technology Park Gdynia has just been awarded the prestigious Storm in the Young Company of the Year category.

Founded less than a year ago in the Pomeranian Science and Technology Park in Gdynia, Pelixar has already completed projects such as drones for search and rescue tasks, designed to search for people in hard-to-reach areas, Air Monitoring of Atmosfera and a system supporting the fight against smog. The company analyzes the state of air using drones in several Polish cities.

The company’s potential was appreciated by the jury of the Pomeranian Storms competition. During the gala, organized on March 27 at the Emigration Museum, the statuette with the title Young Company of the Year went to the Pelixar team.

READ MORE ON THE PORTAL:
https://mamstartup.pl/pelixar-z-tytulem-mloda-firma-roku

Wyborcza.pl - Who picked up the Pomeranian Storms? We already know all the winners.

“For the greatest hope of Pomeranian business, the jury recognized the company Pelixar from Gdynia.The company has developed an innovative solution that will help in the fight against smog.In the long term, it will also create a monitoring system of atmospheric pollution.The company analyzes the state of air in several Polish cities using drones. “READ MORE ON THE PORTAL:

READ MORE ON THE PORTAL:
http://trojmiasto.wyborcza.pl/trojmiasto/7,35612,24591718,kto-zgarnal-pomorskie-sztormy-znamy-juz-wszystkich-laureatow.html

Wyborcza.pl - We slept the last 15 years. A discussion about smog at the European Solidarity Center

“We focused on infrastructure, we neglected clean air”, “You have to limit parking lots in the center of Gdansk”, “Penalties for burning garbage are too low”. These are just some of the conclusions of the Gazeta Wyborcza debate on Saturday about smog in ECS.

READ MORE ON THE PORTAL:
http://trojmiasto.wyborcza.pl/trojmiasto/7,35612,24532431,przespalismy-ostatnie-15-lat-dyskusja-o-smogu-w-europejskim.html?fbclid=IwAR0sKXrVaG_a5BMSDHULFdvviUn5DzFhnzoGyHymqoJhpek6_yRPfWs_vFM

Polish cities are fighting smog in many ways. For several years it has been popular to use specialized drones for this purpose – about this in the material of Agata Zjawińska in the TVN Turbo report.

TVN24 - Drones at war with smog

A special drone enters the fight against smog – it is currently in the testing phase, but is already enjoying great interest. It’s different than what we’ve heard so far. It shows not only where the smog is created, but also where the poisonous, polluted air moves.

SEE THE TV TRANSFER ON THE PORTAL:
https://www.tvn24.pl/polska-i-swiat,33,m/zainteresowanie-wokol-testowego-modelu-drona-mierzacego-poziom-smogu,911835.html?fbclid=IwAR2fvA6FHsB-Da0KpnK7cYOY7KDM6AqU6oS_Gm8LXojYnDzNfzGz-vr67eg

POLAND The Pelixar company from the Pomeranian Science and Technology Park in Gdynia, as the first in Poland, has developed a comprehensive tool to combat smog.

The solution allows for accurate monitoring of the atmosphere in terms of existing pollutants. It consists of an “anti-fog” drone intended for air measurements, locating sources of pollution, which, thanks to the obtained measurements, creates visualizations and maps of the emission distribution for selected locations, enabling better understanding of the formation, movement and concentration of smog clouds and forecasting their occurrence. ultimately operate under the name of the Aviation Atmospheric Monitoring (LMA) …

Eyborcza.pl - They know how to fight with smog. They came up with LMA

The Gdynia company has developed an innovative solution that can help a lot in the fight against smog. It allows for a detailed presentation of the distribution of atmospheric pollution.

The report of the Supreme Audit Office of September last year shows that Poland is one of the European Union’s countries with the worst air quality.
The cleanest air is in the north of Poland, especially in Podlasie. The worst is in the małopolskie and śląskie voivodships. The NIK also criticized the activities of the Ministry of the Environment in the field of air protection.

READ MORE ON THE PORTAL:
http://trojmiasto.wyborcza.pl/trojmiasto/7,35612,24441531,firma-z-gdyni-walczy-ze-smogiem-lotniczy-monitoring-atmosfery.html

Trojmiasto.pl - Technology from Gdynia will support the fight against smog

The Pelixar company based in the Pomeranian Science and Technology Park in Gdynia, in cooperation with the Gdańsk University of Technology, develops a comprehensive solution to investigate the smog problem. In the Tri-City it is not so big, but other Polish cities have already shown interest in new technology.

Mamstartup.pl - The company from Gdynia develops a tool to fight smog

Pelixar S.A. from the Pomeranian Science and Technology Park Gdynia, as the first in Poland, presented a comprehensive solution that allows for accurate monitoring of the atmosphere in terms of pollution.

READ MORE ON THE PORTAL:
https://mamstartup.pl/produkt/14476/gdynska-firma-opracowuje-narzedzie-do-walki-ze-smogiem?fbclid=IwAR1UH4i0S_gC81LqP3Yu-QvWF7zOyTRV3Ixe5vwqNiM5fcbhpG5UkRS7cKo

Gdynia on the “smog map of Poland” performs better than the rest of our country. And here, in the Pomeranian Science and Technology Park, a system is created that can help fight for clean air.

The scientists from Pelixar S.A. have a completely innovative view on the problem of smog. They were the first in Poland to present a comprehensive solution that allows you to closely monitor the atmosphere for existing pollutants.

READ MORE ON THE PORTAL:
https://www.gdynia.pl/co-nowego,2774/smog-poznaj-swojego-wroga,533887?fbclid=IwAR1skYtP3T_5upVV89Ce-BmVGjH7W3zJt5qPoTfOsRoeXhpUVwCeYVxuNJo

New ideas for clean air in Gdynia
How to fight smog? This question has been asked by officials of large cities for a long time. These include Gdynia. An innovative solution to this problem was developed by representatives of the Gdańsk University of Technology and a company from the Pomeranian Science and Technology Park.

MORE ON THE PORTAL:
https://gdansk.tvp.pl/41162841/nowe-pomysly-na-czyste-powietrze-w-gdyni?fbclid=IwAR0EfdSG5Auejw7durruJwRnu9whDqGLTsdXKaKG-2Ak-FX09yuwqaBKHmg

A revolutionary idea
Pelixar S.A. from the Pomeranian Science and Technology Park Gdynia, as the first in Poland, presented a comprehensive solution that allows for accurate monitoring of the atmosphere in terms of pollution.

As part of the first stage of the project, an “anti-smog drone” designed for air measurements was built, allowing for precise location of the source of pollution.

MORE ON THE PORTAL:
http://ppnt.pl/firma-z-ppnt-gdynia-opracowuje-narzedzie-do-walki-ze-smogiem/?fbclid=IwAR26hEvJ9Q_A2fijgqBn4L2YDTUmg3qEkvOIpfTltMJh4-J5HPWWmCJS11M

ELBLĄG.net - anti-smog drone - the latest purchase of the Municipal Office in Elbląg

The Municipal Office in Elbląg purchased a modern anti-smog drone. The city guards will check from the air what Elblaks smoke in their ovens. If it turns out that they use waste for this purpose, varnished furniture boards or plastic packaging, they will pay a fine. Everything for the sake of the health of residents.

MORE ON THE PORTAL:
http://www.elblag.net/artykuly/dron-antysmogowy-najnowszy-zakup-urzedu-miejskiego-w-elblagu-sprawdz-parametry-zdjecia,37820.htm

BiznesiStyl.pl - Vadym Melnyk is the best foreign student in Poland

Vadym Melnyk, an entrepreneur and student of the University of Information Technology and Management, from Ukraine, became the winner of the Interstudent competition for the best foreign student in Poland. Vadym Melnyk won in the “undergraduate” category.

MORE ON THE PORTAL:
https://www.biznesistyl.pl/ludzie/sylwetki/5330_ajlepszym-studentem-zagranicznym-w-polsce.html

MORE ON THE PORTAL:
http://www.eecpoland.eu/2016/pl/prelegenci/adam-wisniewski,5987.html

The new company is to continue the development of projects developed in the aiRPAS Group, specializing so far in solutions in the field of:

READ MORE ON THE PORTAL:
http://ppnt.pl/nowy-biznesowy-projekt-naszych-parkowiczow/?fbclid=IwAR0HRJVAzRC3zy1SsYIMYGzJaUbQgiG6WMlx3ONbg_pXfe7gujfuUVXDp9Q